Keep your ship alive! Conserve your fuel and reach the end of each level. Avoid obstacles like mines and turrets.

This game is being expanded upon. It was originally made in 72 hours for Ludum Dare 46.

In order to download this game you must purchase it at or above the minimum price of $1 USD. You will get access to the following files:

Nice work! You did a good job introducing each new mechanic in a controlled environment.

Small critique: I didn't like having to use the mouse every time I died/finished a level considering the entire rest of the game was played using the keyboard. I think it would have been better to just press a button to restart. It also seemed that I wouldn't get the option to restart until I had stopped moving, which took a long time when I'm getting pummeled by turrets.

The overall concept is solid! Just a few screws to tighten up here and there.

Thanks for playing! Yeah, I didn't even think about doing the reset based on a key press until you said it. The button only shows up when you're not moving, yeah. I fixed one bug but it ended up causing that one and I didn't realize it until after I submitted. Thanks for all the feedback, hopefully I can make a better thing next time!

Nice work, Cole! This game is really neat and has some good ideas. Keep it up. :)

Thanks for playing Jank 😄 I’m happy I got everything in that I wanted to.

I love the controls! I was going slowly through the booster level and then I was forced to go really fast in the next one. You made really balanced levels and I love the level design too! Great game :)

Thanks Jacob! Glad you liked it 😄 It’s a pretty simple game so I wanted to make the levels mix things up. 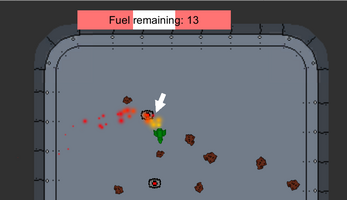